We explore each book for two weeks in a row at PlaySpace. This morning was our second week with the bedtime classic Goodnight Moon.

What we did: On one of the library’s large felt boards, we had a set of cards that each featured a picture of an object that appears in Goodnight Moon. The pictures could all be matched into rhyming pairs: kitten and mitten, clock and sock, house and mouse, moon and balloon, bear and chair. Children could arrange the pictures however they wanted. Some chose to tell the story themselves by putting the pictures in the order in which they appear in the book. Others matched the objects into pairs according to their rhyming names.

Why it’s important: You’ve probably noticed that rhymes figure prominently in children’s books. Recognizing rhyme is a major component of phonological awareness, or a child’s understanding of the way words are made up of individual sounds. Phonological awareness is an important early literacy skill, and studies have linked early phonological awareness to a child’s eventual reading success. As children begin to notice the printed words on a page, familiarity with rhymes helps them recognize the links between printed and spoken language. By seeing words like “big” and “pig” in print, they realize that “ig” makes a specific sound, and that words ending in “-ig” will always rhyme. Conversely, rhyming pairs like “bear and chair” demonstrate that different letter combinations can sometimes make the same sound. 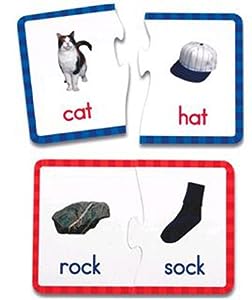 Taking it to the next level: To add an extra challenge, you can lay the cards out upside down and use them for a memory game. Each player takes turns flipping cards over to reveal their pictures. Once you have turned over a card, select another card to flip and try to find a card that rhymes with the first one. If you find a match, keep both cards. If the words don’t rhyme, turn them face-down again and let the other player take a turn. Eventually, both players begin to remember which cards are in which places, and finding matching pairs becomes easier.

Additional reading: There are so many rhyming books for children, it’s hard to know where to start! The library has several illustrated collections of classic nursery rhymes. These rhymes have withstood the test of time and are an important element of our shared cultural literacy.

We’ve explored a number traditional folk and fairy tales this year in PlaySpace, and Each Peach Pear Plum by Janet and Allan Ahlberg a fun rhyming book that combines elements from many of these familiar stories.