The Library will close at 5 pm on Weds, Nov. 23.
The Library is CLOSED on Thanksgiving and on Fri, Nov. 25
The MacKay Branch is CLOSED Weds, Nov. 23 and Friday, Nov. 25
Curbside Pickup now available at MacKay Monday, Wednesday, Friday 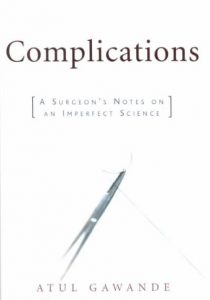 On May 2nd, the Evening Book Group discussed Complications: A Surgeon’s Notes on an Imperfect Science by Atul Gawande.  We had intended to read his more recent bestseller Being Mortal, but it was still too popular to get enough copies – several members were able to read that title though and shared additional thoughts in the discussion.

Comments about Complications ranged from “I am glad I am not going to the hospital anytime soon” – to “I don’t even want a resident in the room!” — One of our members works in the medical education department at Lahey Clinic and she felt that the information in Complications was outdated – (It was written in 2002) – She did feel like it was true to life though in many respects. One area she pointed to that was outdated was how the hospitals identify and treat doctors that go wrong – she said that there is much better tracking these days and repetitive errors are noticed and the physicians are held accountable.

We discussed the God complex that patients bestow upon their physicians and that doctors are not super heroes; they are fallible people just like the rest of us. Indeed Gawande pointed out doctors’ fallibility so often that comments ranged from “I am glad I am not going to the hospital anytime soon” –  to “I don’t even want a resident in the room” We talked about the change in the perception of doctors and medicine over the years. Once patients felt that doctor was always right and he/she made the decisions and now there is much more patient self-advocacy, more choices and the patient is often the leader in their own care. We emphasized the need in a complex world to be advocates for our own health.

We discussed how recently The Checklist Manifesto (also by Gawande) was written and how little procedural doctrine existed before it. We went from very little accountability to being bar-coded when we enter the door of the hospital. There was some discussion and advocacy for the use of computers to replace simple tasks that could be prone to human error – as algorithm has no emotions.

Many of us shared our own experiences in the OR – the way that some surgeons play loud music and a party atmosphere when operating. While that made some of us nervous, one group member remarked that we should only worry when we could hear a pin drop – that would likely be a signal that things are not okay.

We talked about the pros and cons of seeking out specialists versus developing a relationship with a primary care physician who would develop a holistic approach to assessing your health. We want doctors who develop relationships versus a transaction or procedure. The errors that occur when doctors treat but do not consider lifestyle issues when handing out prescriptions and recommendations are staggering.  And these errors take their toll:  http://www.npr.org/sections/health-shots/2016/05/03/476636183/death-certificates-undercount-toll-of-medical-errors

One group member spoke about the fact that we as a people cannot handle the fact that we will die. With all the medical advances, we have taken it so far – people are living longer and often we are not content with doing nothing in the face of illness, even if it might be the best choice. Medicine has become the cure-all — Chemo, radiation, surgery- doctors offer it all, often allowing hope to triumph over reason.  “It is the rare doctor who will say there is nothing we can do for you.” We could use more doctors who aren’t afraid to say “I don’t know.”

With health insurance covering the bulk of major expenses, our out of pocket expenses – while costly, do not preclude most folks from pursuing all avenues to be treated. When considering a procedure, if cost was an issue, would we have had it done then?

One member remarked that we believe there is a “vending machine for life – keep putting in the coins and it will keep spitting out choices/options- some of them worse than life itself. Medicine is not ultimately a magic bullet . You are not a vampire; you will die – stop pretending that it is not going to happen.”

We also talked about the idea of hosting a program based on the Death Cafe – held all over the world – where a discussion of death issues, mortality, end of life care, wills, etc. would be the focus. For those interested, here is a link for Cafes held near Chelmsford: Death Cafe

Also mentioned, not so facetiously, was that we have baby showers and wedding showers – where are the death showers?

Particular sections that were of interest in the book were

Next meetings are June 6th to discuss The Children Act by Ian McEwan and June 20th – to select the titles for next year’s list. Hope to see you there!