Check out the latest reviews from our teen volunteers! 🙂 If you’re in grades 7-12 and interested in writing reviews for our website, check out our Virtual Volunteer Training! 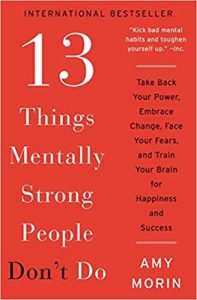 This self-help book follows a therapist who just faced a great loss of a loved one. Morin discusses the obstacles she faced in her life, especially during the grieving period, and covers how she improved her mental health. This story teaches what traits strong people don’t have, and pitfalls that people fall into that can negatively affect their mental, spiritual, and emotional wellbeing. Morin also covers how to surpass those challenges. The book also offers action items on how to improve the quality of one’s life, and how to become more at peace with oneself and increase life satisfaction.

This is one of the first self-help books I’ve ever read. This book has helped me so much in acknowledging negative elements in my mind, and how to prevent them from interfering from my inner peace. I found this book to be very useful, and the explanations for each section understandable and effective. The book is highly effective as it also offers action items for what a person can do to become mentally stronger than they were before.

Among the Hidden by Margaret Peterson Haddix (1998) 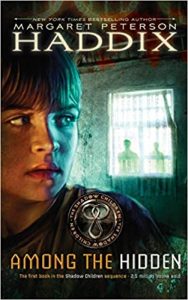 Among The Hidden by Margaret Peterson Haddix was originally published March 1, 1998, and is a dystopian YA novel that takes place in a future where the government has taken
drastic measures to prevent overpopulation. Parents are only allowed to have two children, and having more than that is illegal. Luke is a third child. He’s been in hiding his entire life and now can’t even go outside. New houses are being built where his woods used to be, so he can no longer go outside without risking being seen. Luke had never met another kid before, besides his brothers, especially not another third child. Then, he sees a girl next door, in a house where two boys live. Her name is Jen, and she’s a third child, just like Luke. Jen wants third children to have rights and is not afraid to stand up to fight for them. Jen has a plan that she’s sure will give rights to third children everywhere. However, her idea is dangerous, and Luke doesn’t know whether or not he is willing to put his life on the line. Now, Luke has to decide whether or not to come out of the shadows or stay hidden.

I loved reading this book, and I enjoyed every page. I loved the characters in this story and how they all thought and acted differently. Jen and Luke were two completely different
people, and it was interesting to see the two of them together. Jen was fearless and willing to do anything to stand up for the rights of third children. She never really liked following the rules and often broke them. Luke, however, was timider and hesitant to stop hiding. He followed the rules and listened to his mother. The setting is described well since Luke spent a lot of time observing his surroundings. With him no longer being allowed to go outside, he watched the other houses on the block and talked about the other families that lived there. The setting was developed through his observations and description of the outdoors, something he often did as he had little else to do. I would recommend this book and all of its sequels. This is the first book in the Shadow Children sequence and is worth reading. 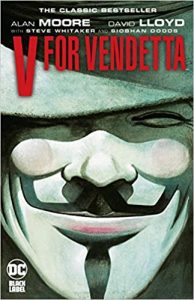 Reviewed by Abhiram
V for Vendetta, written by Alan Moore and illustrated by David Lloyd, is a graphic novel that was published in the 1980s. The story takes place in an imagined totalitarian England during the late 1990s. V is a vigilante who kills people associated with the Norsefire, a fascist British government. The story focuses on the bond that grows between V and Evey,  a girl he rescues from the London police. Adam Susan is the leader of the Norsefire government and believes in fascism. V traps Lewis Prothero, a politician, propagandist, and great publicist because Lewis had a great voice until V drove him crazy. Derek Almond and Eric Finch are police officers who have to arrest V for his terrorism. Delia Surridge is a medical doctor who has an affair with Eric Finch. A similarity between Dr. Surridge, Detective Finch, and Officer Almond, is that they all worked in Larkhill. In the end, V and Eric Finch fight each other in a riot in London. Both take damage, and V dies under the hands of Evey, right after unmasking himself and showing his true face.
I appreciated the artwork in this graphic novel. The setting in imagined totalitarian England looks like World War I or II to me. V’s appearance resembles that of the Joker from Batman. Adam Susan is similar to Adolf Hitler because Mr. Susan claimed himself as the leader who England should depend on, in the same way Adolf Hitler earned the support of the German people and built his Nazi army. I enjoyed reading V for Vendetta and would recommend this book. I would rate it 3.5 out of 5 stars.
Six of Crows by Leigh Bardugo (2015) 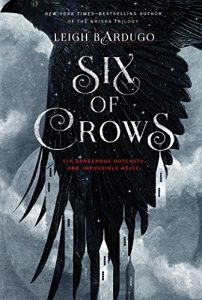 Reviewed by Braneeth
Summary
Six of Crows takes place in an imaginary land filled with thieves, kings, and supernatural forces. Superhuman figures known as Grisha walk the lands, with the ability to control the elements, or sometimes even the human body. When Kaz Brekker and his gang of thieves are offered an impossible heist for an unimaginable sum of money, they are thrown into the darkness of their world. Their mission? To rescue scientist Kuwei Yul-bo from a country that despises the work he has been doing – creating a drug that enhances the already powerful abilities of these Grisha. The book follows Kaz and his crew as they attempt to rescue the most secure prisoner in the world.
My Opinions
Six of Crows is definitely one of the greatest fiction novels I have ever read, and I would
definitely recommend it to any reader. Not only does it have its own fantasy world with its own cool components, similar to the world of Harry Potter, but the combination of magic and nonmagic is a pairing that hooks readers. As a side note, it also has a sequel, plus a different trilogy that takes place in the same world but with a different plot (the Shadow and Bone trilogy).
From personal experience at my high school library, these series have been extremely
popular for almost three or four years, which just serves to show how appealing the story is. Not only is it great due to its interesting fantasy world, but it displays deep character development and feelings, which many fantasy novels fail to do. The book is packed with romance, anger, joy, and triumph. It delves deep into emotions that are relatable to readers in the modern world, regardless of the setting of the book itself.
A unique setting, amazing set of characters, and a fantastic plot make this book (and its sequel) a must-read.
Elantris By Brandon Sanderson (2005) 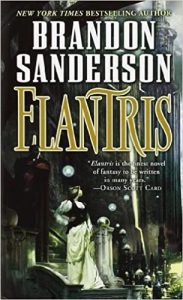 Elantris, the debut novel of Brandon Sanderson, is a masterpiece of fantasy. After the fall of the great city of Elantris 10 years prior, the nation of Arelon has struggled under its merchant king, waiting for the day his likable and passionate son takes the throne. They can only hope that he can take the throne and save Arelon before the militant theocracy of Fjordell turns its sights on the country once protected by the quasi-deific Elantrians that ruled it. Weaving multiple storylines into each other with expert precision, Brandon Sanderson could not have done any better with Elantris.

Among many compelling side characters, Elantris focuses on three separate perspectives. The first is that of the crown prince Raoden. No matter the situation, Raoden manages to look on the bright side of life, and his thorough style of thinking solves many problems others see as impossible. The next perspective is Sarene’s, the princess of Teod, a country to the north of Arelon across an ocean. She journeys to Arelon to marry Raoden to increase the diplomatic relations of their respective countries, but few things go according to plan. The last perspective is that of Hrathen, a high priest of Fjordell, who has been sent to convert the people of Arelon to Shu-Dereth, so they can better be absorbed into the Fjordan empire. However, this assignment is different from the last country he converted, and unexpected obstacles arise.

Elantris, Arelon, and its capital city of Kae are where the majority of the story takes place. The struggles of the people of Arelon, and the even larger hardships of those in Elantris, are well displayed. The world is living and breathing, not a perfect fairytale of a nation. Not stationary either, you can see the effects of what’s happened in the past, influencing the characters and plot in the present day.

At first, there seem to be three separate plots, following Raoden, Sarene, and Hrathen. However, they quickly intertwine, and the actions of each and every character influence the others. The overarching plot changes every chapter, twisting in ways you wouldn’t think possible. Sanderson assembles a jigsaw of a story that comes together bit by bit, everything a mystery in the future but so clear when you look back on it. The novel culminates in the most intense ending chapters I’ve read, with a reveal that broke everything I thought I knew about the masterful system of magic exhibited in the book.

Overall, Brandon Sanderson is one of the best writers I’ve found, and this is one his best books. Each time I read one of his works, they just seem to get better. Elantris deserves a full 10/10.