Summer may be coming to a close, but here at the Library we are a community of year-round readers! See what our teen volunteers are reading and reviewing. Maybe you’ll find your first great read of the fall! 🙂 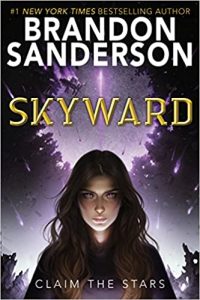 Brandon Sanderson has been among my favorite authors for quite a while now, but Skyward was the first science fiction book I’ve read of his. I was skeptical, as I didn’t think his style of writing would fit with the genre, but my expectations were shattered in the best way possible. The first book in its series, Skyward was unlike any style of science fiction I’ve ever read, and possibly the best as well. Taking place far in the future, what could quite possibly be the last of the human race is stranded on a planet, kept from developing by alien attacks. The heroes of these humans are pilots, who fend off the attacks. Spensa, the main character, wishes more than anything to join their ranks. It seems there’s no way she’ll be let in – but that doesn’t stop her from trying.

As the style of this book is unorthodox, so is its protagonist, Spensa. She doesn’t fit in with the rest of the children, who shun and bully her for her father’s actions. She has an extensive imagination, which not only affects her personality, but adds significant flavor to her character. If defined by any one word, Spensa is persistent. She suffers countless setbacks, failures, disasters, and hardships, yet perseveres through it all, the end goal never leaving her mind. While she doesn’t seem to develop as much as other characters might, this doesn’t detract from the experience of the book in my opinion.

Perhaps the most lackluster component of this book is the setting. While there are several distinct locations, Spensa stays in the academy, the skies, and a nearby cave for much of the novel. Each of these are fleshed out, but not to the extent that Sanderson often goes to, and the relatively low number of locations doesn’t help either. If anything brings down this book, it is the almost mundane setting.

The plot seems to be a trope, but the subplots that constantly branch off, as well as the number of plot twists close to the end, spice up the book from the average story of a hero proving herself against the backdrop of an assumed negative trait. The side stories that are delved into are shown to be much more complex, and toward the end, all wrap together, clarifying many mysteries brought up throughout the novel, and yet leaving so many to be answered in the rest of the series.

While Skyward is definitely not Brandon Sanderson’s best work, it is still a solid read, especially for those who enjoy the style of the Mistborn trilogy, as well as the science fiction genre. Skyward deserves a 7/10. 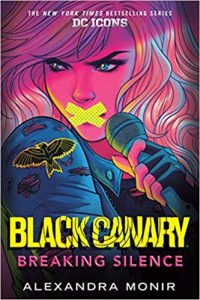 Black Canary: Breaking Silence is an origin story for the superhero, Black Canary. Dinah Lance lives in a world ruled by the Court Of Owls, a world where the rights of women are basically non-existent. The Court also got rid of the superheroes of Gotham City, leaving them with no one to protect them and no one to stop the Court. The superheroes had fought against the Court and their rise to power, but the rebellion was eventually stopped. The women of Gotham City had also tried to rebel against the Court, by singing, but that rebellion was crushed as well. The Court found a way to take women’s voices, rendering the women of that generation, and all to come, unable to sing.

Dinah is part of the generation that has never been able to sing, and never been able to hear a woman sing. However, Dinah knows that she heard a woman singing when she was a little girl. Now, she’s seventeen years old, and she’s realizing that she may have power, more than she ever realized. Still, she can’t sing, not unless she wants to go to Arkham Asylum. Not only that, but she’s managed to draw the attention of a new student, Oliver Queen. A boy who’s very close to the Court, and may give her secret away if he ever discovers it. Dinah wants to help the women of Gotham City, but as Black Canary, will she be strong enough to destroy the Court?

This is one of my favorite books that I’ve read recently, since the Black Canary has been
one of my favorite superheroes for a while now. I was really excited to read a novel about her, and it didn’t disappoint. Dinah is an amazing character, with believable actions and flaws like every person has. She wants to fight against the unjust rulers of her city, but can’t stand out too much, for fear of risking her family and friends. She was a favorite character of mine, right along with Oliver. Oliver has been another one of my longtime favorites, and I was excited to see him appear in this book as well. He’s different from a lot of other people in Gotham City, and he has a lot more to him than people expect. I liked this take on Gotham City, a dystopian city taken over by a cruel dictatorship. It was interesting to see a different version of the well-known city that is home to Batman, a hero that is long-gone in this book. The way the city is described without Batman there to save it is interesting, and I thought it was pretty cool.

I loved every bit of this book, and I couldn’t stop reading it until the very last page. I was honestly sad it was over. I would definitely recommend this story to anyone looking for a good superhero story, especially one that’s pretty different from the usual ones. This book is part of the DC Icons series, one which I have thoroughly enjoyed. Each book is written by a different author, and all of them are fantastic. Many of these authors are international bestsellers and have written well-known books. All of these books are fantastic, and you can read them in any order you’d like, or not read some of them at all. However, I’d recommend all of them. 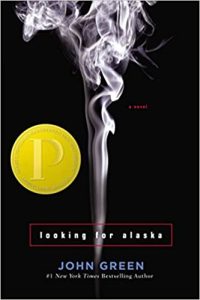 Love and death are two of the most painful yet beautiful things humans must endure. This theme is explored in the novel Looking for Alaska, by John Green. Miles, or Pudge, the Colonel, Alaska, and Takumi all attend Culver Creek Prep School. Pudge had never really had very close friends, but when he moves into Culver Creek, he meets his best friends. He is immediately drawn to Alaska, and he thinks that she is the most beautiful girl he has ever seen. He cannot seem to understand her habits or her personality which makes her more appealing to him. However, Alaska is in a relationship, so Pudge must love her silently. The friend group loves pulling pranks on the school, and overall having a great time. However, when tragedy strikes their friend group, each person must cope and reveal their secrets.

I loved this book and it brought up so many emotions for me. The love that Pudge has is incredible and it is relatable because he is unsure of how to express this love. The friend group struggles with many things that teenagers struggle with today including heartbreak, drugs, and death. I would recommend this book for a mature high school audience, as it does deal with several heavy topics. This book made me cry and laugh simply due to the brilliance of John Green’s narration and the emotion that he was able to express through his words. Pudge’s sadness translated perfectly through the book, and this novel is definitely one of my favorites.

The Outsiders by S.E. Hinton 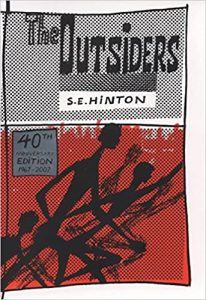 The Outsiders is a very interesting novel, amazing for kids in middle school or older. There are many plot twists which makes this a really good book.

The Outsiders has two “social classes.” The richer, more “sophisticated” group is called the Socs. The other group is called the Greasers. Greasers are the opposite of Socs. Their hair always has grease, they are less rich, and stereotyped to just be not as good as the Socs. This book is mainly focusing on Ponyboy and his friends who are all Greasers. Socs like to jump the Greasers just for “fun” but when one of them tried to hurt Ponyboy you will not believe what his friend Johnny did. (Read the book to find out!)

I loved this book and rate it a 10/10! The Outsiders is probably the best book I have read this year. It’s really hard to choose but my favorite character is probably Johnny. He is the “pet” of the group (smallest but not youngest and nobody can hurt him). Johnny is my favorite because of what he does to save Ponyboy, which proves he is a true friend and will always have Ponyboy’s back. My favorite part was when Johnny and Ponyboy ran away together because the whole story completely changed from there.

The Beauty that Remains by Ashley Woodfolk (2018) 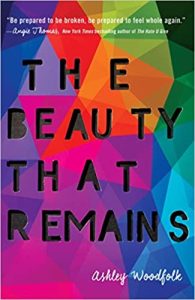 The beauty that remains by Ashley Woodfolk is a story about three strangers who love music. But is that love enough to help them through the death of their loved ones? Logan is a singer suffering from the recent death of his ex-boyfriend, Bram. He keeps watching the vlogs  Bram had posted, unable to let him go. Shay is a music blogger, a job she had once shared with her identical twin, Sasha, who lost her battle against her sickness. Shay thinks that she knows all about her sister there is to know, but when she decides to go through Sasha’s room, she discovers another side to Sasha that she had never known. Autumn is just another high school student, but when her best friend, Tavia, dies in a car accident, Autumn just can’t accept it. She goes on with her life still texting Tavia, even though she knows that she will never receive a message in return . These three strangers have to learn how to let the ones they loved go and make peace with the fact that they are gone.

Ashley Woodfolk intricately crafts teenage life, depression, death, mystery and romance, and makes it an amazing book that is both relatable and exciting, making you long for more. This book had me on the edge of my seat from beginning to end, the different personalities and perspectives just made the book seem even more intriguing. One of the things I liked most about this book was the character development. You can clearly see the main three learn a lot about themselves and see the world from a whole new perspective. I loved seeing each character struggle with the change, but in the end learn to accept it. The Beauty that Remains dives into deep topics and questions you will be asking yourself throughout the book. I absolutely loved this book and would definitely recommend it to anyone looking for a serious read.