Our teen volunteers continue to amaze me with the wide range of books they read and their candid, well-written reviews. Check out the latest installment below!

The Iron Trial by Holly Black and Cassandra Clare (2014) 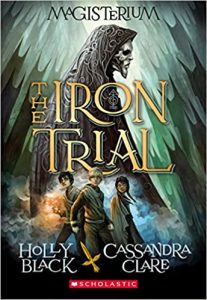 Summary
The Iron Trial is a fantasy novel written by Holly Black and Cassandra Clare, and is the first out of five in the Magisterium series. The book tells the tale of young Callum Hunt, the son of two elemental ages that is about to undertake the Iron Trial to decide whether he will learn magic at the Magisterium. While almost everyone is excited at this prospect, Call has been warned by his father to fail, as he blames magic for the death of Call’s mother. The Iron Trial and the events that follow begin to reveal Callum’s origins and past, weaving a plot of mystery and danger.

My Opinions
The Iron Trial has all the elements of a great fantasy novel. It’s almost Harry Potter-esque
in the sense that it has a whole background of magic, as well as its very own school of Magic. The antagonist keeps readers hooked with his ominous persona, and the protagonist and supporting characters are interesting and humorous as well. One concern with the book is the age group it appeals to – the book uses simpler vocabulary and plot development, resulting in it being a book appealing to younger readers. Though the book’s simplicity may result in some readers staying away, it certainly does deserve a chance. Its setting is quite unique, but still does possess the elements of a good book. A unique setting, captivating plot, and interesting characters all make the book a worthy read. If you do enjoy The Iron Trial, make sure to keep reading through the rest of the Magisterium series. 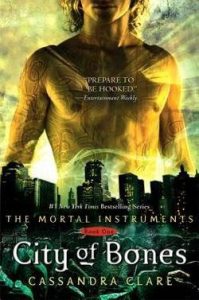 The City Of Bones, by Cassandra Clare, was originally published on March 27, 2007, and is about Clary Fray, a girl whose whole world got turned upside-down when she met the Shadowhunters. They are warriors who fight demons, and keep the world safe. Jace, Alec, and Isabelle are all Shadowhunters who Clary watch commit a murder. Clary is pulled into the world of demons, vampires, and werewolves, when she herself is attacked by a demon. Not only is she attacked, but her mother goes missing. The Shadowhunters are very interested in Clary, as she shouldn’t even be able to see them, and the demons shouldn’t be interested in her. Now Clary has to figure out how to find the man who kidnapped her mother, and survive the dangers of the shadow world.

I really loved reading this book, and loved the characters in it. I had a lot of favorite characters, since so many of them were really fantastic. The setting was described in such a way that I could picture walking with Clary and the Shadowhunters. The plot was fantastic, and the story moved at a good pace. I never felt like anything was being rushed, or lasted longer than it needed to. Each character’s actions in the story made sense for their personality traits. I would definitely recommend this title. It has fantastic characters, a great plot, and is all-around a great book. If you like this book, I would also recommend reading the other books in this series, as they are also incredibly fun to read. 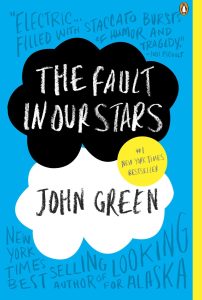 The Fault in Our Stars, written by John Green, is a 2012 young adult novel. The plot follows the love story between cancer patients Hazel and Augustus. After seeing many praising reviews, I figured I would adore this book, and it would most definitely change my life.

Unfortunately, it just wasn’t for me. First of all, I felt nothing for these protagonists. I saw no difference between Hazel and Augustus, and it was like they were the same person (but not in a good way). Both characters seemed too perfect, and acted nothing like real people. The two were prone to suddenly bursting into long, philosophical, and poetic speeches. For example, Augustus comes up with this right on the spot “My thoughts are stars I cannot fathom into constellations.”

Apart from the characters, I think the book was pretty well written. The plot was interesting, and I enjoyed Hazel’s quest to contact Peter Van Houton. It didn’t stand out very much, but it wasn’t bad.

Overall, this book wasn’t my cup of tea. But I know plenty of people who would enjoy it,
especially those who like romances. This is perfect for fans of All The Bright Places and Five
Feet Apart.

The Alloy of Law by Brandon Sanderson (2011) 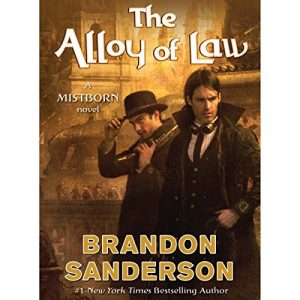 The Alloy of Law is the first book in the Wax and Wayne trilogy, set in the same world as the Mistborn Trilogy, three centuries later. Scadrial is on the verge of modernity, with industrial-age firearms, electricity, and skyscrapers in the enormous city of Elendel. While technology is advancing, magic still infuses the world, and Waxillium Ladrian is able to wield it. After Wax’s uncle dies and passes the entire Ladrian House to the former lawman. When Wax returns from the Roughs, he is caught up in the swirl of political intrigue and a plot to bring the capital city of Elendel to its knees.

The three main characters of The Alloy of Law are Wax, his sidekick Wayne, and Marasi, the daughter of Lord Harms, leader of a house with more money than reputation, who wishes to join the constabulary. All three characters had their strengths and flaws, and Wax was much more a flawed character than most protagonists are. He has had trouble readjusting to city life, and it is shown in Sanderson’s writing. Wayne, however, is my personal favorite, due to his nonchalant approach to almost every situation.

The world of Scadrial and the city of Elendel weren’t entirely well developed. There is a map of the country and a city map of Elendel, and I appreciate it when authors include maps in their books as it helps me visualize where locations are in relation to each other. The time period was amazing, and I enjoyed the industrial/steampunk setting more than most fantasy settings I’ve read.

The plot itself was masterfully written, with most of the story focusing on Wax and his sidekicks attempting to uncover devious plots by the criminal underground of the city, but with interludes every-so-often giving the reader small tidbits on what the crime gangs are doing. It eventually wraps up in an amazing resolution, and just when the reader assumes Wax has won, the epilogue reveals that the roots of the operation ran deeper than what Wax, Wayne, and Marasi dug up.

Overall, The Alloy of Law was one of the best books I’ve ever read. It incorporated everything I like about fantasy and mystery, and Sanderson’s style of writing is one of my favorites. Before you read The Alloy of Law, consider reading the Mistborn trilogy, as it provides background information about how Scadrial and Elendel came to be, as well as being works of art. I would rate The Alloy of Law a full 10/10. It has become one of my top five favorite books.