As the temperatures drop and the sky darkens early, take advantage of blankets, warm drinks, and good books! Our teen volunteers have written some great reviews to share – maybe one of these will be your next cozy winter read! 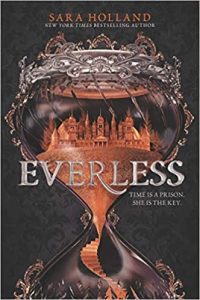 The book Everless, is by Sara Holland, and is followed by the book Evermore. It is a beautiful fantasy novel with twists like spiral stairs.

A girl named Jules lives in the land of Sempera where everything depends on time, which people pay in the form of blood-iron. Jules’s father is low on time and Jules needs to find a way to help him. She is desperate enough to return to Everless, the manor where she and her father were exiled by the wrath of the Gerling family. She must face her fear and her once childhood friend to save her father before time runs out.

At Everless, Jules starts to learn more and more about abandoned villages, and about the tale of the Sorceress and the Alchemist. The Alchemist stole the Sorceress’s heart and he reincarnates himself to keep the Sorceress at bay, each reincarnation, a different life filled with power. Every step of the way, heart-wrenching secrets about Jules’s life begin to unfold. Everless isn’t safe for her anymore, and she has to pay with the life of those she has left behind.

The Thing about Jellyfish by Ali Benjamin (2015) 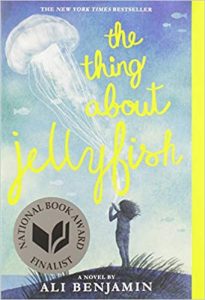 In the book The Thing About Jellyfish, Suzy’s best friend, Franny, dies unexpectedly in a tragedy. Suzy believes that it’s not an accident and she thinks that she died from a rare jellyfish sting. Now she wants to prove to the world that Franny didn’t die from an accident.

Overall, I enjoyed reading The Thing About Jellyfish and would highly recommend it to teens and tweens.

Among the Hidden by Margaret Peterson Haddix (1998) 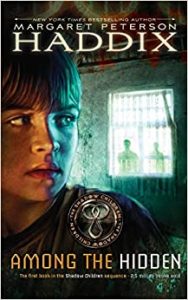 Reviewed by Claire
Among The Hidden by Margaret Peterson Haddix was originally published March 1, 1998, and is a dystopian YA novel that takes place in a future where the government has taken
drastic measures to prevent overpopulation. Parents are only allowed to have two children, and having more than that is illegal. Luke is a third child. He’s been in hiding his entire life and now can’t even go outside. New houses are being built where his woods used to be, so he can no longer go outside without risking being seen. Luke has never met another kid before, besides his brothers, especially not another third child. Then, he sees a girl next door, in a house where two boys live. Her name is Jen, and she’s a third child, just like Luke. Jen wants third children to have rights and is not afraid to stand up to fight for them. Jen has a plan that she’s sure will give rights to third children everywhere. However, her idea is dangerous, and Luke doesn’t know whether or not he is willing to put his life on the line. Now, Luke has to decide whether or not to come out of the shadows or stay hidden.
I loved reading this book, and I enjoyed every page. I loved the characters in this story and how they all thought and acted differently. Jen and Luke were two completely different people, and it was interesting to see the two of them together. Jen was fearless and willing to do anything to stand up for the rights of third children. She never really liked following the rules and often broke them. Luke, however, was more timid and hesitant to stop hiding. He followed the rules and listened to his mother. The setting is described well since Luke spent a lot of time observing his surroundings. With him no longer being allowed to go outside, he watched the other houses on the block and talked about the other families that lived there. The setting was developed through his observations and description of the outdoors, something he often did as he had little else to do.
I would recommend this book and all of its sequels. This is the first book in the Shadow Children sequence and is worth reading.