Summertime is here & our teens keep reading up a storm! Check out our teen volunteer’s reviews of some titles you may be considering for your next read 🙂 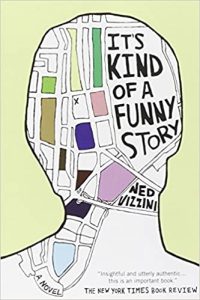 In the young adult novel It’s Kind of a Funny Story, by Ned Vizzini, Craig Gliner struggles with mental health and he navigates his way through the pressures of high school with the burden of depression.

Vizzini does an excellent job of painting an accurate picture of a high school student and their struggles with anxiety and depression. As the amount of teenagers being diagnosed with depression increase, this novel is perfect for educating and explaining the correct steps to deal with suicide. Craig gets into a prestigious high school, but he quickly realizes that he is unable to cope with the stress that is associated with said high school. Craig tries coping with drugs and quickly feels himself spiraling until one day he admits himself into a mental health facility. Craig’s story is illustrated with just the right amount of humor to keep the audience engaged.

I love Craig’s character because he is honest and truly embodies the typical high schooler. Craig encounters many interesting characters during his stay in the hospital which help elevate the story to the next level. I would recommend this book for high schoolers and
young adults because this novel does deal with some mature topics. Anyone who likes
humorous books will definitely fall in love with Vizzini’s novel. 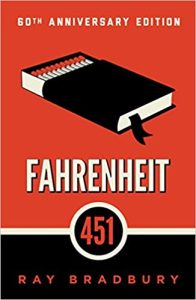 This book takes place in a dystopian society, where “uncomplicated, noncomplex happiness” is a priority. Books are prohibited by law and burned by firemen, leading to the effect of people and societies containing little to no substance, meaning, or opinions and profound thoughts. Firefighter Guy Montag secretly harbors books and is tired of living in an uncultured world of superficiality. He soon realizes that no literature has created societal problems and feelings of apathy and despondence. He continues to explore the values of literature and the importance of thinking for oneself while combating the dangers of a harsh government.

This novel was a captivating read, from start to finish. It was so interesting to read a concept like this, especially in the current age of technology, where people read less than decades prior. The novel is easy to follow, and suitable for both a school reading assignment or for leisure. While I am not the biggest fan of how the story ended, I would still highly recommend this novel.

In Cold Blood by Truman Capote is a nonfiction book about the murder of the Clutter family; however, it is not completely factual. The murders of four members of the Clutter family take place in Holcomb, Kansas. This novel holds special value to me as I learned that this novel changed Capote’s life, and he was never the same after it. While telling the story of the murders of Herb, Bonnie, and their two kids, Capote switches off between different perspectives. Capote tells the story through the perspective of the murderers and follows the story through investigations as well. The interesting thing about In Cold Blood is that the audience knows who the murderers are throughout the whole novel. Capote focuses on the murderers and their backstory, almost as if he were justifying their actions.
I personally was very intrigued by the plot of the story before I picked up the book. I think that while the story is interesting, it is a heavy read. I feel that the novel is packed with extra information and lots of long paragraphs of details and background information. I would give this novel a 6/10, just because it was easy for me to drift off and lose attention while reading it. The overall story is interesting, and I like the structure of the novel. It was also fun to analyze Capote’s intentions while writing his book and see events through different perspectives. 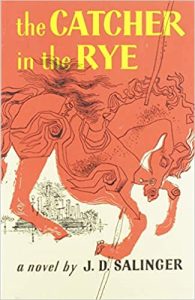 Catcher in the Rye revolves around a teenage boy, Holden Caulfield, who is narrating from a hospital and recounting what happened to him in the week before Christmas break. This book explores the mind of a depressed teenager and the events that led up to him realizing he needed help. He is being expelled by Pency Prep, one of many private schools he’s been kicked out of, and instead of going home to disappoint his parents he takes a secret trip to New York. There his condition becomes worse as he realizes what state he is in mentally at the moment. Through his thoughts and actions we learn many things about him, his life, and the reason he is depressed. There are many life lessons woven into the story and the reader is left to reflect on the idea that many things we take for granted, like our parents’ love, mean a lot.

Overall I really liked the book. The book keeps you engaged, wanting to know from the beginning how Holden got into the hospital. We go through his adventures and see his downfall over time. Sometimes though, Holden got on my nerves as you could clearly see he was not making any effort to make his life better and turning away good opportunities. Holden Caulfield was a very realistic teenage character, but to the extreme, and that was because he was depressed. This book does have swearing in it and some intimacy, so I would recommend this book for high schoolers and above.

Lord of the Flies takes place on a tropical island in the Pacific Ocean, amidst a worldwide war. A group of preadolescent boys is stranded on the island after their airplane crashes. Among the boys are two of the main characters, Piggy and Ralph. Using a conch as a horn Ralph is able to unite all the boys on the island together and form a frail democracy. However, throughout the course of the novel, the democracy falls apart and a faction of the group breaks off into their own tribe. The novel follows the group of boys as civilization turns into chaos, while also exploring deeper themes such as the inherent evil within man.

Lord of the Flies is a novel filled with morals and warnings towards readers, and for that reason, I would definitely recommend the book. The novel discusses mature ideas such as civilization versus anarchy, innocence, and community, and the book uses its characters to display these themes. One thing that I did not find the book was able to represent as well was the better side of mankind, as it overall took a very negative and critical stance towards mankind. However overall the book has a fantastic plot, especially with its great list of characters. Piggy is representative of the rationalism of man, however, his logic and goodness are often ignored by bullies such as Jack, an ideal representative of the real world when the intellects among us are suppressed. Jack represents evil and dictatorship – what happens when we let our instincts control us. Finally, Ralph represents leadership and democracy – he is not perfect but a far better alternative to the pure chaos that Jack represents