November is here and, as always, we are feeling thankful for books! Check out the reviews below to see what our teen volunteers are reading and enjoying. Maybe you’ll find your next great read!

With the Fire on High by Elizabeth Acevedo (2019) 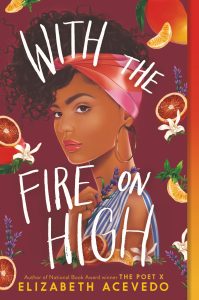 Released in 2019, With the Fire on High is an outstanding book written by Elizabeth Acevedo. Emoni Santiago, a high school senior, has a busy life raising  her young daughter while also juggling school work. She also has a passion for cooking and wants to attend a school trip to Spain as part of a new culinary arts class.

This book had great pacing and kept me captivated the entire time. Acevedo included very vivid images, especially when describing the meals that Emoni cooks. I also liked the recipes included, which tied in nicely with the story’s themes. The author also made  Emoni’s relationships with friends and family seem authentic. Her dialogue with her grandmother ‘Buela, best friend Angelica, father Julio, and friend/love interest Malachi all felt natural. Emoni was a very strong character.

Overall, I would absolutely recommend this to anyone interested in realistic fiction. The reading level is probably best suited for middle and high school aged teens. 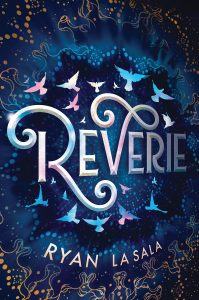 Reverie, which was written by Ryan La Sala in 2019, is a fantasy novel that follows the gay teenager Kane Montgomery after he woke up half-dead in a river next to a burning house with his car slammed into it. Along with having lost fragments of his memory, Kane is chased by a ghastly creature and magical strangers who claim to be his friends, and he encounters strange dreamlike worlds that he is supposed to “unravel”. However, as he tries to navigate through all of this, he discovers how everything that occurred is connected, and he must realize who he should be fighting and stop them before reality becomes a lucid dream controlled by that person.

This dreamy fantasy story is packed with so many unique aspects that work together really well. I’d consider all of the characters to be favorites. Kane, the protagonist, may be rude and make stupid mistakes, but that’s what makes him so relatable, and he’s also quite caring and perseverant. Additionally, the quirky villain is so well imagined. I had to stop and admire the descriptive writing that painted the fantasy world and action so clearly in my mind. It was cool how the crazy ideas made so much sense when explaining them using the logic of dreams. Also, I loved the mysteries and how seemingly trivial details become significant later in the story. Fantasy lovers seeking an interesting and imaginative world will enjoy this fantastic book. 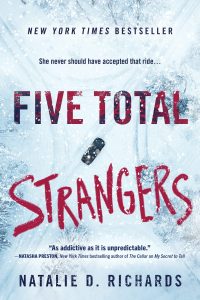 Five Total Strangers was published on October 6th, 2020, and is a YA thriller by Natalie D. Richards that will have you on the edge of your seat until the very end. It’s crucial that Mira gets home for the holidays, but her connecting flight is canceled because of a massive blizzard. This leaves Mira stranded at the Philadelphia airport until further notice. Then, Harper, a girl who Mira just met on her plane, offers to take her home in a car she and three friends are renting. However, Mira discovers that these people aren’t friends, but are strangers. And each one seems to have a secret. Their trip soon becomes far more dangerous than anticipated. The roads are disastrous, so slippery that they’ve caused multiple massive pile-ups, and everyone’s stuff keeps going missing. Someone is lying, and maybe even trying to sabotage them. If Mira wants to make it home alive, she needs to learn what each person is hiding before the end of the drive.

I honestly loved this book, and thought Mira was a great character. She had a lot happening around her, and was forced to deal with an incredibly dangerous and high-stress situation. Reading about her trying to figure out what was going on during the drive was interesting. Everyone’s belongings were disappearing, and everything seemed to be going wrong. Plus, she was stuck in a car with four people that she didn’t know.  She couldn’t leave, since she was stuck in the middle of nowhere and was essentially forced to stay in a car with people who may or may not have been trying to sabotage her. Staying in the car could be just as dangerous as getting out, and just trying to figure out who people really were was difficult. Plus, driving the car was almost impossible as they were in an enormous blizzard – the weather was hazardous, and people were constantly sliding off the road. Just driving down the road was dangerous enough, not to mention the things going on inside the car. I could really picture the actions and setting, and I thought it was incredible. I would definitely recommend this book to anyone looking for a good mystery/thriller – it will have them hooked from the first page.

Lord of the flies is a novel by William Golding. A group of boys travel in an airplane that crashes on a tropical island, and they are left to fend for themselves without any adults. Leaders are chosen, divisions start forming, and violence occurs. The book shows how civilization plays a huge role in our lives, how brutal humans can actually become and how young boys could behave if left alone in extreme circumstance.

I feel like this book was really well written and very close to reality. Golding was a headmaster in an all-boys school who also had served in World War II and saw the many horrors human beings could do. That’s why he decided to write this book in which he shows his perspective of humanity. This book can be read through many lenses, an adventure story lens, a religious lens, and a psychological lens – it is filled with symbolism. The plot was interesting and I would definitely recommend teenagers 13+ to read this book, as it showcases a unique view of humanity.