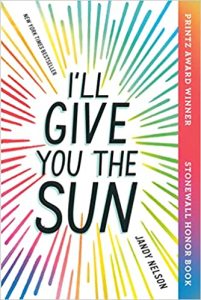 Jandy Nelson’s novel I’ll Give You The Sun, published in September of 2014, is a marvelous and devastating story of two twins and their bond. Jude and Noah were the best of friends when they were young, but a series of tragic events and people forced them apart. Noah struggles with his sexual identity when he meets Brian, and Jude struggles with her personal identity as she enters her teenage years. Both Noah and Jude’s lives are consumed with art, but when tragedy strikes, their love for art is tested. Amidst their developed hatred towards each other, they both make some unacceptable decisions, but they must learn to forgive each other and themselves. The two must find their way back to each other and become best friends once again.

I loved reading about Noah and Jude because each of their perspectives were so unique
and both of them were so lovable. Their personalities aided the plot as it developed, and their distinct differences kept the story interesting. This novel deals with love, addiction, and loss which are all topics that are applicable to teenagers today, making this a perfect book for young adults. I would definitely recommend this book to people who love stories told from several perspectives with bittersweet endings.

We Should All Be Feminists by Chimamanda Ngozi Adichie (2014) 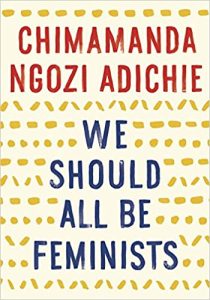 What is a feminist? This is the question Ngozi Adichie tackles in this brief nonfiction book based on a TED Talk she gave in 2012. Many people seem to believe that feminists are radical man-haters. She argues that this is completely untrue, and proceeds to back her argument with facts and data. According to google, feminism is “a range of social movements and ideologies that aim to define and establish the political, economic, personal, and social equality of the sexes.” Ngozi Adichie makes a sound argument that by this definition, feminism is a battle for equality.

She discusses how in today’s society, many people are under the impression that feminism is essentially the belief in female supremacy, when it is in fact the fight for equality between all sexes and gender identities. Without knowing the true definition of the word feminism, it can be misinterpreted in various situations. Ngozi Adichie does an excellent job of clearing up this misinterpretation by explaining what feminism is, who is considered a feminist, and establishes that, “we should all be feminists.”

I highly recommend this short read for anyone who is interested in learning more about feminism and other social justice movements. 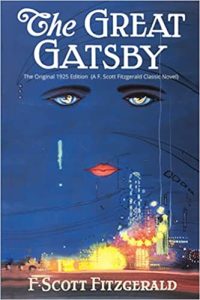 Summary
The Great Gatsby is a novel that takes place in 1900’s New York, specifically a suburb of Manhattan where the wealthy live. The novel follows young Nick Carraway who narrates a story of the romance between his cousin Daisy and a mysterious newcomer to town, Jay Gatsby. Though at first Gatsby seems the average rich man, his mysterious past is revealed throughout the course of the book. The plot is further complicated by Daisy’s arrogant husband Tom, who despite having an affair of his own, shows a clear hatred towards Gatsby.

My Opinions
The Great Gatsby is a much more complicated novel than what meets the eye. The
author, Fitzgerald, uses the slightest of details that go a long way towards understanding the characters. Each character has their own motivations, and their individual agendas combine to create a very mysterious plot. Furthermore, Nick proves a frustrating narrator, only revealing bits and pieces of the full story leaving readers in suspense. Befitting a book filled with mystery and rumors, readers are left to fill in parts of the story with their own imagination.

I would definitely recommend The Great Gatsby to any young adult reader. Not only is it
one of the most interesting novels I’ve ever read, but it also addresses many important universal themes. Some of these themes include the effect of time on relationships, societal norms, as well as the American Dream. For younger readers, the book may be a little too subtle with its details, but that does not mean it would not be a good read for them. 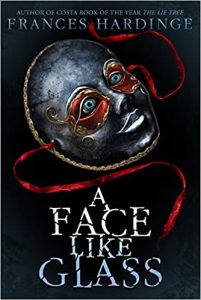 A Face Like Glass, which was written by Frances Hardinge in 2012, is a fantasy novel located in a beguiling underground city called Caverna, whose residents can only learn facial expressions if craftsmen known as Facesmiths teach them how to do so. It follows Neverfell, a 12 year old girl who lost her memories and was taken in by the distrustful cheesemaker Grandible, who lived in tunnels isolated from the dangerous world and forced her to wear a mask. One day, a Facesmith named Madame Appeline visits them, and Neverfell, feeling a connection to her, decides to sneak a gift of some of Grandible’s magical cheese to her. However, Neverfell learns that her actions put Grandible in danger, and when she chases a rabbit to a secret passage leading outside, she decides to try to fix her mistake by recovering the cheese. Neverfell learns that her mask was to protect her because she is different, as her face is expressive and reflects her exact thoughts, and she becomes entangled in the heart of a grand plot as she attempts to uncover the secrets of her past and the dubious world.

I fell in love with the imaginative plot and intriguing aspects of the world of Caverna. It was so bizarre, as it included wines that can erase parts of your memory and certain items that can extend your lifespan for hundreds of years, yet at the same time, it felt real and incredibly deep. Neverfell had to navigate a dangerous and unfair world where the elites murdered each other regularly, a single silly mistake could result in execution, and the labor of powerless drudges fueled the world. The characters, their motivations, and their developments were spectacular, including the antagonists, and I loved the uncertainty of whether friends were foes or foes were friends. Being in a world full of lies with her personality made Neverfell prone to manipulation, as she was naïve and trusting, but she was also clever and resilient and ended up changing people’s lives. Neverfell’s development and transition from innocence to disillusionment to maturity was extremely well done. The writing was so engrossing; at first it seemed too descriptive, but I grew to enjoy its elegance and creativity. I especially adored the descriptions and similes, which painted vivid pictures in my mind, and I experienced so many emotions while reading this. There were so many thought-provoking lines. Even with the darkness, there was so much hope throughout the story. It was fast-paced with many clever, shocking twists, and I loved how it made my mind think and consider perspectives and possibilities. Fantasy lovers seeking an interesting world and thrilling adventure will enjoy this fantastic book. 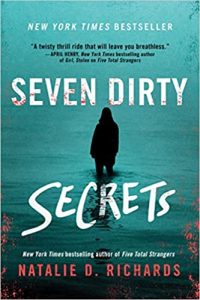 Seven Dirty Secrets by Natalie D. Richards was published November 2, 2021, and is a
New York Times bestseller. On Cleo’s 18th birthday, she finds an odd box in her bathroom. She was the only one in the house, and her parents were away. Everyone else claims that they aren’t responsible. This mysterious box invites her to partake in a scavenger hunt. It would be fun if the clues weren’t reminding her of her dead boyfriend, Declan. He had died a year before on a group rafting trip. The clues all have to do with him and their relationship. Then, she starts to get phone calls with Declan’s voice. Cleo believes that Declan is the culprit. However, whoever they are, wants revenge, and Cleo has to finish the hunt before anyone else dies.

This book was incredible, and I enjoyed reading every bit of it. There were always more
twists and turns, more things to figure out and discover. My favorite character was Hope’s
brother, Connor. He was always loyal to Cleo and believed her when others didn’t. It was
interesting to imagine Cleo going through this hunt, discovering clues and trying to solve them before the clock ran out. The story takes place over a few days. It shows how much time they have left until whoever runs the hunt says their time is up. I would definitely recommend this book to anyone looking for a good mystery. There is something new at every turn, and the book is incredibly well-written. This author also wrote Five Total Strangers. I haven’t read all of this book, but from what I read, it was good. I would say to check this one out as well.