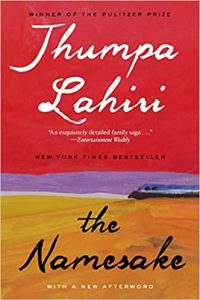 Summary
The Namesake follows Gogol Ganguli, the son of two Indian immigrants living in Massachusetts. Gogol’s name is unique, it is neither Bengali nor American, and it leaves Gogol confused about who he truly is. The book follows Gogol’s journey as he searches for his own identity whilst traveling through multiple loves and experiencing tragic losses.

My Opinions
The Namesake is definitely a book that sparks two very different opinions. Those who dislike the book find it hard to read and understand, and view it as a boring novel. After
all, a book about someone’s entire life is bound to be dull at certain points. However, from a holistic view this book has some very important themes such as one’s search for identity, change and adaptation, and the feeling of being an outsider. The book brings light to the struggles of children in the United States and not being able to fit in. It also discusses important concepts such as the difficulty of finding true and lasting love.

Though I cannot guarantee The Namesake will appeal to every reader, I would recommend everyone at least give it a try. Its combination of powerful messages and relatable characters make it a captivating novel. It is a book capable of producing powerful emotions from its readers, and though it might be long and meticulous to get through, its underlying messages are truly powerful. 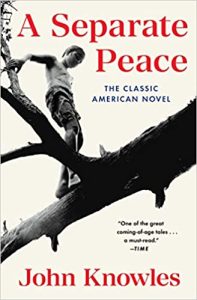 In the novel A Separate Peace by John Knowles, Gene and Finny attend an all boys school named Devon. The two must explore their relationship during their coming of age years. Gene and Finny are supposedly best friends, but it seems as though Gene feels resentment towards Finny. This feeling manifests itself within their relationship, and Gene’s actions cause pain to Finny. The boys struggle as secrets are withheld and revealed. The two must sort out their relationship while struggling with the possibility of enlistment, as this book takes place during World War II.

I really liked this novel because I felt that it was very relatable for teenagers today because the boys are in their coming of age years and are trying to navigate themselves through troubling times. I do think that the book was sometimes repetitive, but nevertheless, it was a good read. I would recommend this book to anyone who is looking for a story about friendship. 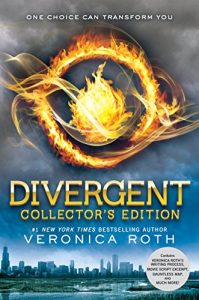 Divergent by Veronica Roth was published April 26, 2011, and is an incredible YA dystopian novel. Society has been divided into factions, groups of people who all believe a certain trait to be most important. There’s Abnegation for selflessness, Erudite for intelligence,
Dauntless for the brave, Candor for the honest, and Amity for the peaceful. Tris has been in
Abnegation her whole life, but it’s coming time for her to join a faction. However, when she gets tested to see what would be her best fit, she gets a dangerous result. Tris is Divergent, a secret that she must keep to survive. Tris chooses to join the Dauntless, and is thrown into a world far more dangerous than she expected. In her new faction, Tris faces dangers she never believed, and does things she never thought she would to survive.

I really loved reading this book, and I would definitely recommend it to anyone who likes
dystopian books. My favorite character in this book would have to be Four, since he seemed to be one of the only people in the book who was willing to listen to Tris. He was one of the nicer characters in the book, and he was definitely the best by far. My least favorite would have to be Tris, since I thought she could be a bit whiney or annoying at times. I didn’t like her very much, but I liked the rest of the characters. I really loved the headquarters of the Dauntless, and it really felt like I was there when Tris described it. It definitely fits the Dauntless. The plot of the story was really good, and even if some things could be predictable I still loved reading it. I would definitely recommend this story to anyone looking for an exciting book, and all the rest of the series along with it. 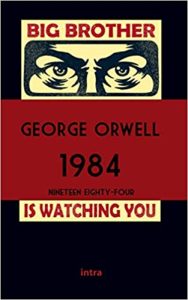 1984 by George Orwell is a dark and compelling novel about a society ruled by Big Brother, a totalitarian government force. This book took me a while to read, but it was extremely worth it. It wouldn’t be right to say I enjoyed this book, but I wholeheartedly recommend it.

Published in 1949, this book tells the tale of Winston Smith, a common man living in Oceania. In every person’s home, they have a television device that monitors everything they say and do. The government controls everything, and people will disappear for thinking “thought crimes”. Winston falls in love with Julia, but their relationship is forbidden.

The whole story had me captivated. There were a few parts in the story that were a little hard to understand, and I had to reread a section or two. But overall, the novel was a great experience. It offers commentary on politics and government, and serves as a cautionary tale. I would recommend this to fans of other science fiction books and authors like Ray Bradbury, Kurt Vonnegut, etc. If you chose to read 1984, keep in mind that it has a lot of mature themes. 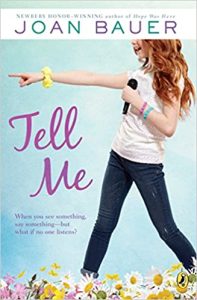 The book Tell Me by Joan Bauer is a fictional book that follows 12-year-old Anna McConnel’s vacation. The book takes place in Rosemont where Anna goes to stay with her grandmother to get away from her parents’ marriage troubles. She keeps herself busy by helping her grandmother prepare for the town’s flower festival. One day, while helping out at the library, Anna sees a girl who seems to be held against her will. Anna is determined to find out the truth about the girl she saw. When she sees the frightened eyes of the child involved, she is convinced that she is responsible for uncovering the truth behind the situation and tracking down the child. She never once doubts herself and works with her friends and uses other resources to approach the situation. The story follows Anna as she tries to find out more about the girl she saw.
This book does an excellent job of using a fictional story to inform young readers about human trafficking. It is a really good introduction to it in terms of explaining what it is without scarring young readers. It mixes the concept and seriousness of human trafficking with Anna’s life problems and friendships and doesn’t overdo it on either side. I would recommend this book, and many others by Bauer, for middle school readers. Tell Me is a great quick read. I love Anna’s character development in the story; she goes from being anxious and worrisome to mature, determined, talented, outspoken, and sure of herself.