As of Monday, July 13, the Library is open to the public with reduced capacity - Read More
Stay Home, Stay Connected: download and stream ebooks, movies, and more through the library! 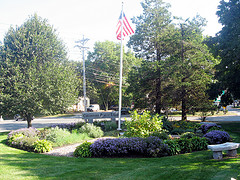 A desire for beauty, education, reflection and a place for the public to gather led the Country lane Garden Club to design and install an 1894 themed garden at the Chelmsford Public Library – (often still referred to as the Adams Library by longtime residents.)

The design was influenced by the architecture of the original building and designed in the colonial format of a symmetrical layout with interesting paths at right angles. The plants are native or ones that were available in 1894, the year the library opened.

Maintained by the members of the Country Lane Garden Club, the garden offers an informative look at the past and an opportunity to gather and reflect on how we can continue to use these plants today in our own gardens.

Read more about the history and construction of the garden  below, or see more photos. 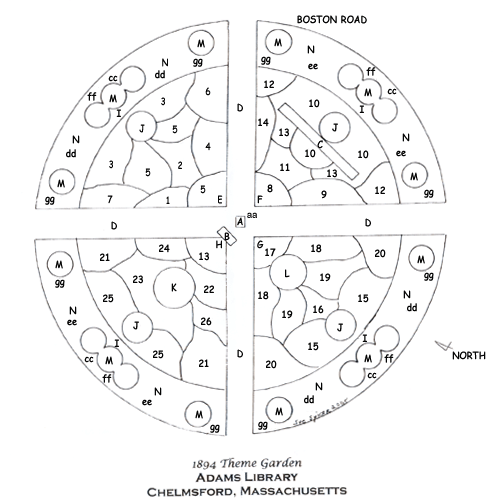 In 1998, the Town of Chelmsford entered the 21st century by building a state-of-the-art new building for our library. The library is located in the center of town and viewed by all residents and visitors. The 1894 library was left next to the new building to preserve our past. While new landscaping was installed, it lacked a link to the past. Country Lane Garden Club implemented a plan for a teaching garden at the old library for the community that would provide a horticultural link to 1894.

The focus of the garden would be historical plants, education, drought tolerance, organic methods and ease of maintenance. The final design was a 40 foot diameter circular bed around the flagpole. This design followed the colonial format of a symmetrical layout with intersecting paths at right angles. Four separate gardens would contain culinary, medicinal, household and ornamental plants that were native and/or used in 1894, the date on the main library building. In addition, the new bed would repeat the circular dome of the building, the arched window and the triangular roofline.

In April 2005 club members gathered to begin preparing the site for the approved garden. The circle and intersecting paths were marked and edged. Several layers of newspapers were placed on top of the existing lawn inside the circle. After wetting the newspaper, 235 forty pound bags of Coast of Maine Penobscot compost were spread on top for a total of 9,400 pounds. This method eliminated removing the existing sod. It was also easier to move individual bags of compost instead of using shovels and wheelbarrows to move several loose yards from the parking lot.

By the end of May 2006, club members had installed 112 plants, topped the four paths with wood chips and generated a maintenance schedule for the rest of the growing season. In keeping with the 1894 theme, mulch consisted of three inches of compost from the April application. The mulch also supplies nutrients and improves the organic content and texture of the soil.

The Heritage Garden is supported in part by the Chelmsford Friends of the Library.

What’s in the Garden?